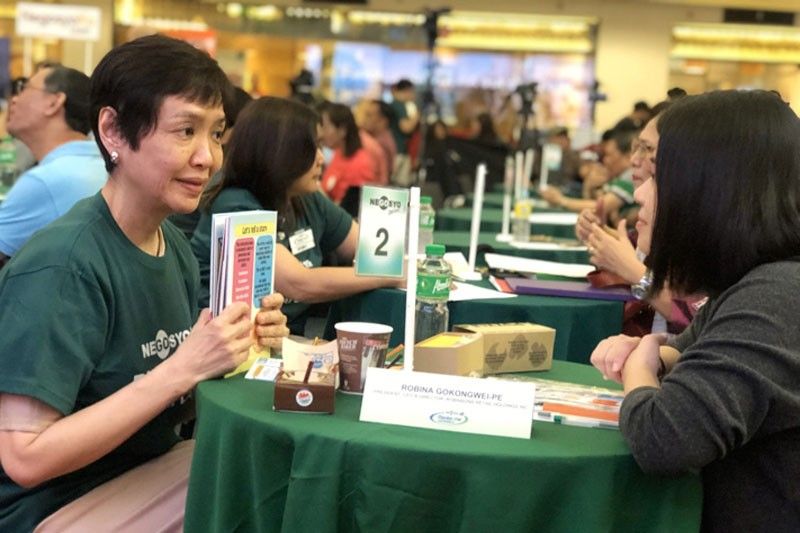 Robina Gokongwei-Pe of Robinsons Retails Holdings with her mentee.

Go Negosyo is celebrating its 15th year this 2020, and we have prepared events all year round to mark this significant milestone.

The first of these events is the first rollout of our flagship mentorship program, Mentor ME On Wheels (MMOW), which was held at Robinsons Place Manila last Jan. 27, in partnership with the Department of Trade and Industry. I’m glad that the event was able to gather over 1,000 micro and small entrepreneurs, bringing the total number of mentees served by MMOW to more than 15,000. This feat too was made possible because of the continued support of our entrep-mentors.

The first for the year, this MMOW event was made even more special by the presence of industry leaders who served as mentors to aspiring entrepreneurs. We were joined by Robina Gokongwei-Pe of Robinsons Retails Holdings, who was able to mentor Irene Rito, a bank employee and entrepreneur, among others. Irene has been selling products online for about a year now but the risks associated with growing her business have always intimidated her. She said that it was reassuring to hear from a mentor like Robina that she should not be afraid to work on herself more and explore other market opportunities that can help her scale up.

Michael Tan of LT Group Inc. also served as a mentor and was able to give advice to entrepreneurs like Alexi Alquizar, owner of the start-up A2D Transporters. Alexi wanted to consult about a decision-making concern, something Mike, head of one of the country’s biggest conglomerates, has had extensive experience with. In an interview, she said, “Even though he admittedly approach management traditionally, which is evidently effective, he still showed eagerness to understand my startup’s business process and we ended up agreeing on thinking big but expanding organically for now.” Getting to talk to someone like Mike, she said, is truly a once-in-a-lifetime experience.

I, myself, was able to mentor Michael Loyzaga, who traveled all the way from Batangas to attend the program. He’s one of the thousands of residents who were recently affected by the Taal Volcano eruption. The eruption severely affected the operations of his bagnet express. Seeing the potential of his business, I referred him to Eric Caeg of the Association of Filipino Franchisers Inc. to help him explore other opportunities in franchising. I believe that our event has opened doors for him to leverage his product. He was also invited to attend AFFI’s intensive program, Usapang Marketing, held last Tuesday at our co-working space in RFM building.

I also had talked to the husband and wife team, Gerard and Chie Mata, who are not newbies to our Go Negosyo programs. In 2010, Chie attended our Women Summit and two other events the following years. She and her husband had decided to dedicate themselves full-time to their business, and have showcased their clothing items at malls, bazaars, and trade fairs.

I was going to leave already that day but I told my team I could mentor one more entrepreneur. Then I met Jezzah Alpay from Quezon City, who owns Bon Angelo Enterprise, a local manufacturer of rubber and plastic products. I realized her products can be valuable to our refrigeration company. To my surprise, I also found out that she’s the daughter-in-law of my former secretary of 20 years, Carmen Alpay. After learning that Jezzah was not a pre-selected mentee and she really happened to be the one next in line among the attendees, I know that at the time, the crossing of our paths was Divine guided.

Mentoring can really be a life-changing experience for both mentors and mentees. Mentees who are still treading the path of their entrepreneurial journey are able to receive guidance from mentors who, for their part, find fulfillment in helping others succeed. I hope, in the future, when these mentees have achieved their own success, they will return the favor by becoming dedicated mentors themselves to other aspiring entrepreneurs.