Go Negoyso Project ARK implementation at different barangays in Quezon City in partnership with Mayor Joy Belmonte. A total of 4,141 rapid tests from the initiative were successfully conducted. The test kits were donated by GT Capital, Wilcon Depot, RFM Corporation, and FFCCCII. 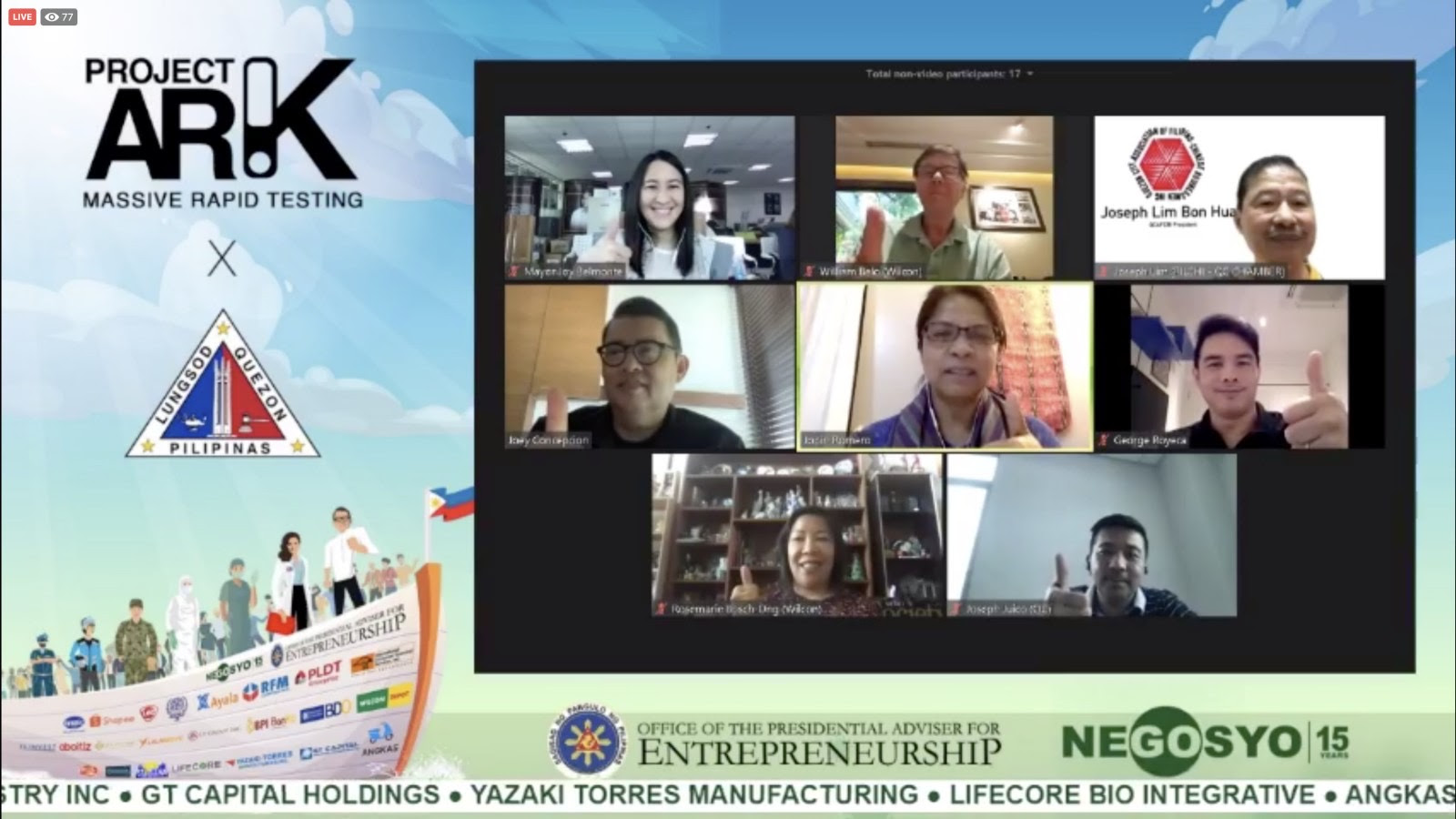 Presidential Adviser for Entrepreneurship and Go Negosyo founder Joey Concepcion lauds Quezon City Mayor Joy Belmonte on the city’s plan on mitigating the spread of COVID-19 and announces the completion of a total of 4,141 rapid tests from Project ARK (Antibody Rapid test Kits) during a virtual presser today.
From those tested, 3,342 were negative, 642 were IgG positive which means they’ve had the virus and was able to recover and build antibodies, 20 people were deemed IgM positive, 137 tested IgG/IgM positive, and 30 were symptomatic. A total of 186 people were immediately directed to the appropriate hospital facilities for a complimentary RT-PCR swab testing.

“The efforts of both the government and the private sector are basically focused on saving lives and livelihoods. The only way we can open the economy safely is to create greater visibility. Creating visibility is to do a lot of testing. Targeted mass testing is our approach, whether we use RT-PCR or rapid test kits, whatever testing methods are available out there that give us good visibility is what we have to do,” Concepcion shared.

He also added that Project ARK will be rolling out helping other cities in Metro Manila as well as other nearby provinces. “We continue our efforts with the LGUs. Testing has to happen to create visibility.”

Mayor Belmonte also expressed her gratitude for Project ARK: “We are great believers in testing and in fact we have already established six community-based testing facilities. When this project was brought up, I was really excited. We’re advised that rapid testing is always done in conjunction with the PCR test. I always believe that rapid test is a really good way for us to gauge and screen who should we administer the PCR test given that these tests are expensive so we embrace this project wholeheartedly.”

Project ARK led by Concepcion bands together with the different private companies and business conglomerates in the country that aims to ramp up both rapid and RT-PCR testing in the country. With the data collected from these efforts, the government and different industries can gain better visibility of the enemy and develop better strategies to combat the virus.

Barangay implementation is part of Project ARK’s bayanihan initiative. In addition to supporting the screening of employees to ensure safety at work, Project ARK encourages companies to lead the voluntary testing of barangay citizens.

As of date, Project ARK has generated more than 1.2 million rapid test kits from close to 300 companies.

Project ARK has also conducted close to 30,000 tests with the LGUs of Pasig, Taguig, Quezon City, Makati, and Antipolo to bring mass testing down to the community level.